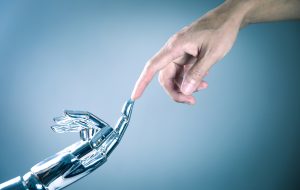 Artificial Intelligence is also known as AI. It is a type of computer science that is working on technology that can work like a human being and react like a human being. Computers that have been given AI can take part in tasks such as planning and problem solving and they are also capable of speech recognition.

Naturally, it is not easy to programme a computer to carry out tasks such as this so this is an area of IT which is very much still in development. One of the main features of AI research is knowledge engineering. The only way that a computer can act and behave like a human is to have a vast amount of knowledge available to it.

Another field that is linked to AI is robotics. Scientists have been able to create robots that look like humans and that have the ability to hold a conversation. Robots no longer look like something from Doctor Who, but they are designed to replicate human function as much as possible. Robots need a certain amount of intelligence to be able to complete tasks as requested but this is a field that is also developing rapidly and within a few years, robots will be highly complex.